I was sitting at Earls Hot Rod Shop, chilling with my friend Kenny. We get a phone call and it’s Movie Producer / Talent Manager – Ron Samuels.

First thing Ron says after introducing ourselves is.. “I made that car”.

The only thing Martin knew, was from an incident when he was driving in Los Angeles one day and was stopped at a light. Suddenly Martin noticed someone flagging him down and told him that the car belonged to 1970’s “Wonder Woman” Lynda Carter. The light changed and the person took off, leaving Martin behind – with just the tip of the iceberg history; about this vehicle. 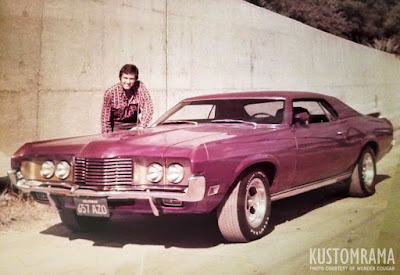 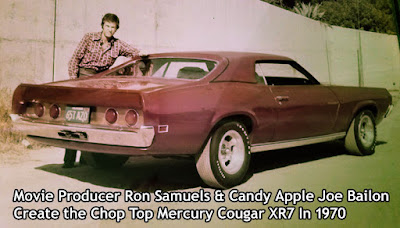 Copy of the Pink slip that shows the original (license plate 657AZO) and date when Ron Samuels purchased the car on March 23, 1970.

As we talked to Ron Samuels about his creation – he began to tell the story of how he immediately hated his brand new car as he drove it home. Which was the beginning of his motivation to kustomize it. 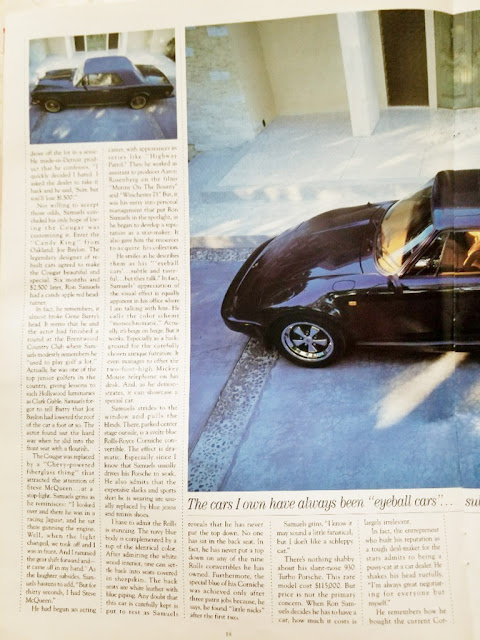 Ron loves what he calls “Eyeball Cars” and what he created with Joe Bailon, is a definite eyeball car.

He talks about this Eyeball Car in an article by Jeanne Wolf: [It seems a long way from a Rolls-Royce to the first car Samuels remembers with real affection, a brand-new 1970 Cougar.

Then, I dig a little deeper and discover that the effect was calculated even then. It began with an impulse to buy that would characterize the acquisition of a lot of his later cars.

He forked over $5,000 and drove off the lot in a sensible made-in-Detroit product that he confesses, “I quickly decided I hated, I asked the dealer to take it back and he said, “Sure, but you’ll lose $1,500.”

Not willing to accept those odds, Samuels concluded his only hope of loving the Cougar was customizing it. Enter the “Candy King” from Oakland, Joe Bailon. The legendary designer of rebuilt cars agreed to make the Cougar beautiful and special. Six months and $2,500 later, Ron Samuels had a candy apple red head turner.

In fact, he remembers, it almost broke Gene Barry’s head. Samuels forgot to tell Barry that Joe Bailon had lowered the roof of the car a foot or so. The actor found out the hard way when he slid into the front seat with a flourish. Eventually.. “the Cougar was replaced by a “Chevy-powered fiberglass thing”] – and that was that.

Ron talked more on his relationship with Joe Bailon and shared with us Joe’s plucky “better you than me” attitude – while he had Ron sitting on an orange crate inside the car, to support the weight of the roof as Joe set the chop.

On the technical side, chopping the top of a 1970 Mercury Cougar XR7 is a very difficult thing to do. Especially because of all the curved windows and tempered glass everywhere. But that apparently didn’t scare Joe Bailon one bit and jumped right in and did it.

Whenever Joe and Ron would talk about their creation, “Bitchin” was always how Joe expressed his feelings about this car. Later on, Ron Samuels had his wife Rachel McLish sent us some pictures of himself with his creation.

And it’s incredibly inspiring to see pictures of this vehicle, so fresh from being kustomized in 1970.